Walt Disney's first breakout cartoon character was Oswald the Lucky Rabbit. As the earlier Alice Comedies began to flame out, Universal Pictures requested a new cartoon character and Walt provided one in the form of Oswald. 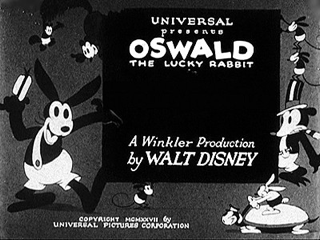 Oswald was a feisty cartoon character, perhaps more feisty than other Disney characters. He was never too scared to back down from a fight and often instigated them, unlike his younger brother Mickey Mouse.
Oswald was a big success, but he caused one problem for the Disney Brothers- according to the contract signed with Universal Pictures, they were the ones who held the copyright. When Universal saw how popular Oswald had become, they wanted to keep more of the money for themselves. Mr. Disney was told that Universal Studios would take Oswald away from him and that there was nothing he could do. Walt accepted the legal situation, but quietly planned to get his revenge on Universal Pictures.
Universal handed production of Oswald to Walter Lantz, who would later find limited success with his Woody Woodpecker series. Walt Disney moved on to create the greatest cartoon character ever known- Mickey Mouse.
The story seemed to end there, with Mickey Mouse becoming a sensation, while Oswald languished and eventually became a mere footnote in animation history. However, a clever deal made by Disney CEO Bob Iger brought back Oswald, putting him back inside the company of his creator. Oswald was a huge character in Japan, so his arrival at Tokyo Disneyland was a huge affair. He was less known in the United States, so Disney has been carefully reintroducing him to fans.