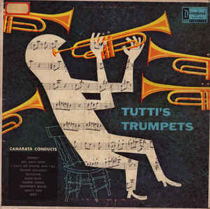 Tutti Camarata had been given free reign by Walt Disney to work on any project he wished in between his assigned projects. This allowed Camarata to produce more esoteric albums that probably wouldn’t have seen the light of day otherwise. One such project was Tutti’s Trumpets, which unsurprisingly featured Camarata’s compositions and arrangements played on trumpets. It was an odd choice for a release from a children’s record label named after a theme park, but it gained a cult following and became a must have recording for trumpet aficionados.
Posted by Ralph at 7:26 AM