DISNEYLAND: Wish You Were Here!

When DISNEYLAND first opened, Walt Disney knew that he would need help in spreading the word about his Magic Kingdom in Anaheim. A way to do this while generating revenue that could be used to expand the park was to sell souvenirs. T-Shirts, books and other souvenirs could be eagerly snapped up by his guests who would share them with friends and family back home. In its early years, the park was able to put together a stellar lineup of merchandise that is highly sought after even today. This week we’ll take a peek at an early catalog of treasures that could be shipped around the world direct from Walt Disney’s One and Only Magic Kingdom. 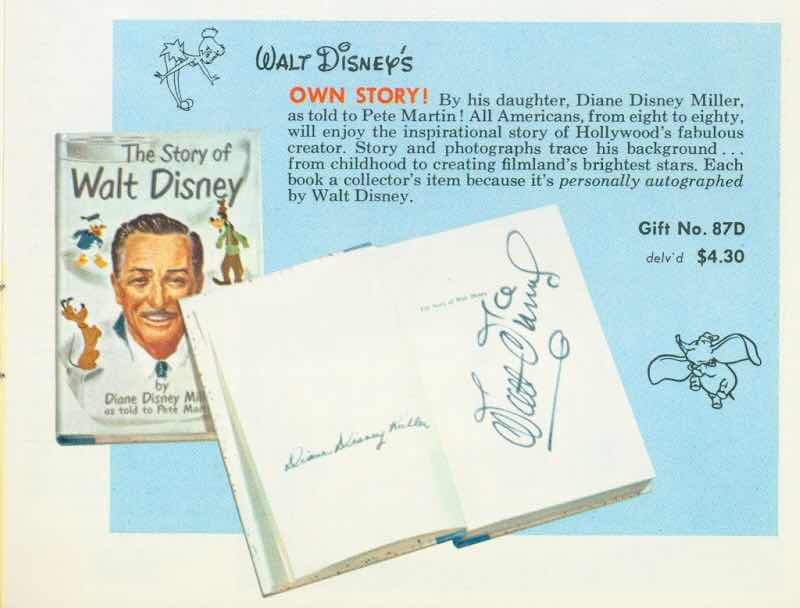 Walt Disney was approached by a publisher who wanted to have him write a book about his life. Pete Martin was supposed to ghost write it for him, but since Walt’s daughter had just been married, he wanted the book to be “written” by her so that she would earn his share of the royalties. Diane wasn’t too keen on the idea of claiming full authorship, so the ghost writer was given a writing credit; a rarity in publishing. Of course, DISNEYLAND would sell the book but how could they make it special? By having both Walt Disney and his daughter autograph the books. A special treasure indeed! The signed books are extremely rare and worth quite a lot nowadays.