Mickey is 90! “Don’t Worry Everything OK”

When Walt and Lillian Disney boarded the train for New York City to negotiate with Universal Pictures for a new series of Oswald cartoons they knew it would be contentious. Universal and its representative Charles Mintz were already signaling that they wanted to lower the cost of producing each cartoon. What the Disneys didn’t know was that Universal had already negotiated to hire away many of Walt’s animators if he didn’t accept their offer. 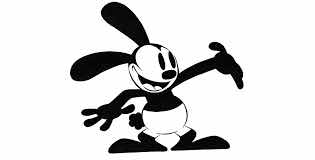 And Universal thought that it held the upper hand; after all, they had originally negotiated to retain ownership in Oswald’s copyrights. As far as they were concerned, Walt Disney was just an employee working for them. When Walt refused to accept Universal’s lowball offer, he was powerless to stop them from taking his first creation. Oswald would move to Universal and The Disney Brothers Studio would be ruined; or so Universal thought. Walt Disney would begrudgingly board the California Limited, dejected and depressed. It would be a long train ride back home. Walt would send the following telegram to his brother out in Los Angeles: 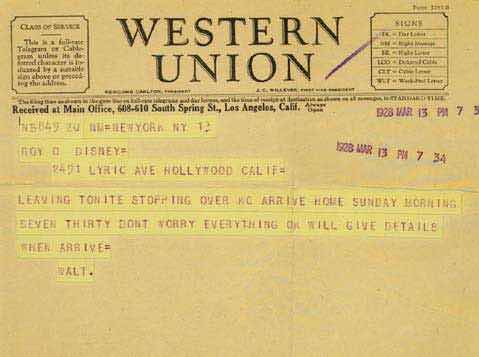 A strangely upbeat telegram to send considering the dire straits the company found itself in, right?
“Don’t worry everything OK will give details when arrive”.
Walt Disney wasn’t trying to disguise his despair with an overly chipper telegram. He was going back to California with an idea that would not just change his company’s fortunes; it would literally change the world. The idea would catapult Walt Disney to success beyond his wildest dreams. Who could have imagined that a company worth billions of dollars today was all started by a Mouse? 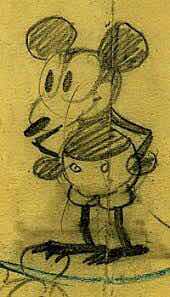 Posted by Webmaster at 9:15 AM