With P.L. Travers on board, Walt Disney set about arranging his production team. Prior to Mary Poppins, Walt Disney and his animators would storyboard a feature and determine where the songs should go. At that point, the studio’s songwriters would be brought in to work on the music. They were told what the song should convey and how it should fit into the film.

For Mary Poppins, Walt Disney wanted to change the process. He wanted the songwriters to be involved from the very beginning so that the music would be fully integrated into the picture. This would involve the hiring of full time staff songwriters, which was becoming a rarity in Hollywood. After the collapse of the studio system, most of the studios had shed their full time staff. Walt Disney Productions, on the other hand, had so many musical projects in the hopper that it still had staff writers- Richard and Robert Sherman to be exact. 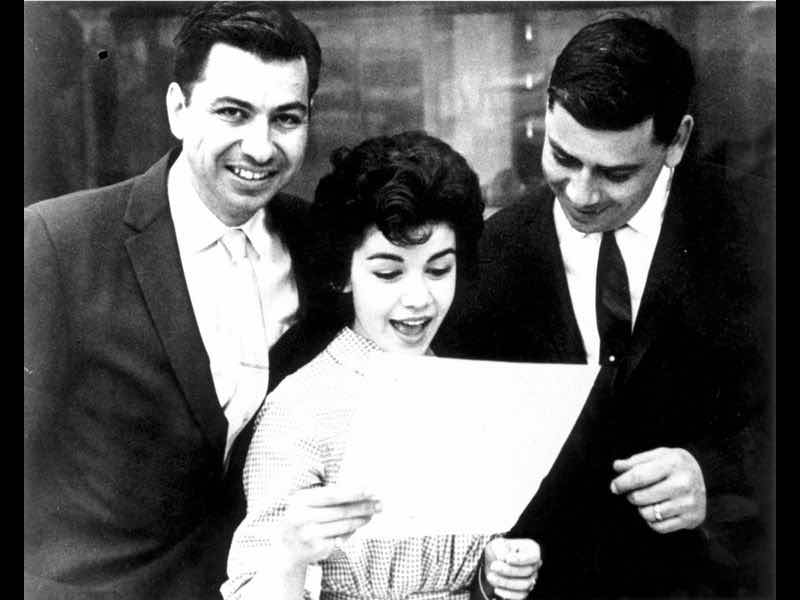 Richard and Robert Sherman were the sons of legendary song writer Al Sherman. Despite their father’s discouragement, they decided to join the family business and become song writers. They mostly wrote bubblegum songs, which caught the attention of Tutti Camarata, who hired them for DISNEYLAND Records. Tutti had been tasked with turning Annette Funicello into a pop star and he felt the Shermans could do the job, as well as write other songs that might be required for the label. Annette’s string of hits caught the attention of Walt Disney, who offered “the boys” the chance of a lifetime- to write the music and songs for Mary Poppins. The brothers were surprised; not only did Walt Disney apparently know who they were (they hadn’t had much direct contact with him up to this point) he also entrusted them with a massive film project that was near and dear to his heart. They had never undertaken such a project before, but they could hardly say no to Walt Disney. They eagerly accepted this new challenge. When it came to scripting the action, Walt Disney selected the person at his studio who he felt was the best at script and story writing- Don DaGradi. Don was asked to work with the Sherman Brothers to craft a fully realized story that was completely integrated with the music and songs. While Don knew he was fully up to the challenge, he would have to do some on the job training with the Shermans to get them up to speed on what was required for a movie script and how their songs could become an indelible part of the final picture. The biggest challenge, however, would be working with the strong willed P.L. Travers. It would be an experience nobody involved would ever forget.