In 1943, with the war raging on two fronts, the United States needed money to fight the Axis powers. The IRS was trying to get Americans to see paying taxes as a patriotic thing to do. They turned to Walt Disney and Donald Duck to help.

The company produced The Spirit of '43. The premise was that Donald Duck dragged his feet when paying his taxes, thereby weakening national defense.

Donald is shown being tempted to throw his money away on frivolous things, but in the end he comes to his senses and helps defeat the Nazis by paying his tax bill on time. 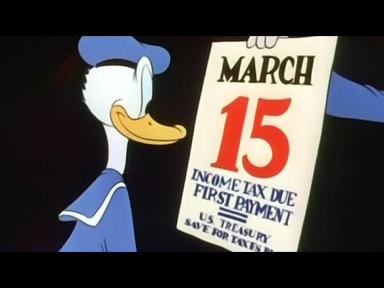