One of the most legendary Disney Theme Park characters has amazingly only been in the park for a total of less than six months yet he began his run over 45 years ago. This mythical character is the Hatbox Ghost.

His existence has been the subject of much debate over the years. While he was in a lot of Haunted Mansion printed materials from 1969 when the ride first opened. However, as many guests began to notice, he wasn't actually in the ride. As the years went on, guests began to ask about the wily missing creature. The official story was that he never existed. He was used in promotional materials and books as a fanciful interpretation of what could be found inside the house, but no figure existed. Many guests soon believed they just imagined him; they saw him in the various souvenir books and merely assumed he was in the ride. Was that the case? 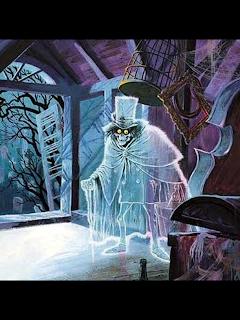 Actually, as eventually discovered, he *did* exist. During the 1990's, a Disney cast member, certain he had seen the figure years earlier as a child, took advantage of his position and scoured Imagineering records to find any proof the hatbox ghost existed. And he found it in a guide written up by Imagineering that had instructions on how to maintain the animatronics. One of the figures listed was the Hatbox Ghost! Was the company lying about the figure before? Most likely not; DISNEYLAND had merely forgotten about the figure and assumed it never existed. When that was disproven, they embraced the ghost, making a ton of collectible merchandise featuring him. The new theory was that he had been removed from the ride prior to it opening to the public because his special effect was not believable. It was believed that guests who claimed to have seen him were still mistaken. 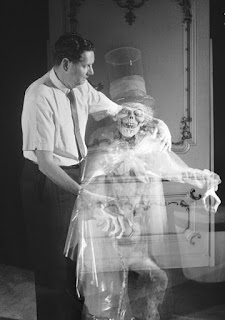 However, just a few years ago, film footage from the ride's first public weekend was unearthed- and there in all his glory was the Hatbox Ghost. He *had* been in the ride on opening day all along. While he was most likely removed not long after opening week, it is uncertain when he was taken out. At first Imagineering tried to fix him, but due to the huge crowds the Mansion was attracting, they had bigger issues to deal with, like making sure the attraction was operating at full capacity to handle the huge crowds. Soon the Hatbox Ghost was forgotten and it is believed he was re-used later as a different character in the show America Sings. This year, a new animatronic was created with working special effects and he was placed back where he belongs- to scare and amuse forever more. 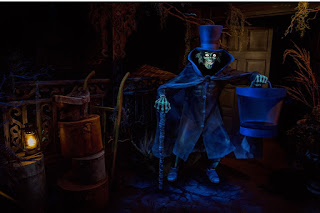