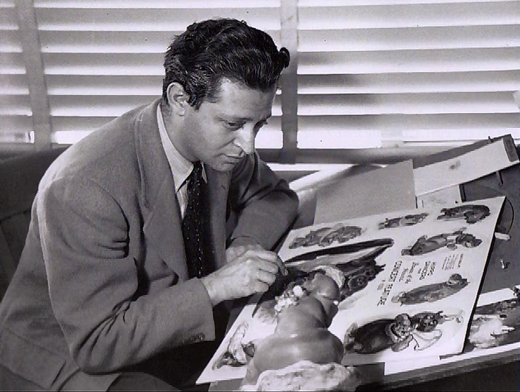 Joe Grant has a unique place in Disney history. He had a hand in both Disney animation Golden eras- the original and the one that took place in the 1990's. He began his Disney career working on Mickey Mouse shorts, but he quickly moved up to features, animating the evil queen in Snow White and overseeing Pinocchio and Fantasia. The dog Lady from Lady and the Tramp was even based on a dog he owned. Mr. Grant left the studio to found his own greeting card and ceramics business.
He returned decades later to guide Disney through its second golden age, working on The Little Mermaid, Beauty and the Beast, Monsters, Inc and Up. Mr. Grant felt a loyalty to the company that his friend Walt Disney had founded, working right up until he passed away at age 97.
Posted by Retlaw Yensid at 7:53 AM