When Walt Disney remodeled Tomorrowland in the late 1960's, he wanted it to have more attractions than it had up to this time. For the first 10 years, Tomorrowland was mostly filled with exhibits, a few sponsored by Monsanto. In 1965, Mr. Disney convinced the company to put up more money to sponsor a major ride. Thus Adventure Thru Inner Space was born. 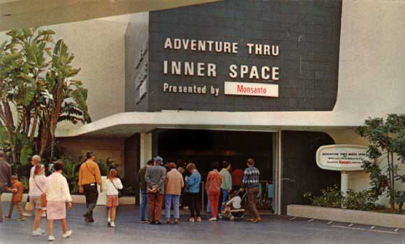 The story behind the attraction was that DISNEYLAND and Monsanto were running experiments and today, you can participate! (It was a simpler time when people actually trusted Monsanto to perform experiments on them.) Guests boarded omnimovers (the first use of such technology in the world) and would get shrunk down to a microscopic size so that they could view the world as a tiny microscopic cell. 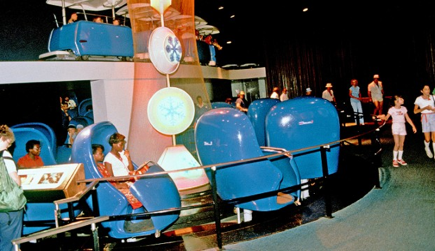 An elaborate shrinking device greeted guests, making it look like they were going inside it. Tiny animatronic figures completed the effect. Inside the ride, guests viewed a single snowflake and other microscopic objects. There's even a view of a giant eye that apparently is looking at you through a microscope. Eventually guests would be returned to their normal size and disembark, hopefully having learned something about science. 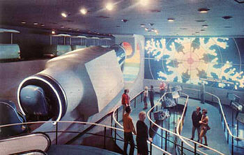 Eventually, the ride would fall out of favor with both Monsanto and guests. Monsanto realized that they didn't really sell anything to the general public at the time and thus might not need to sponsor an attraction in DISNEYLAND. Monsanto's reluctance to renew its sponsorship agreement meant that the attraction didn't get the upgrades it needed to stay up to date, which soon affected ridership. The attraction eventually closed to make way for Star Tours.
Posted by Ralph at 7:10 AM