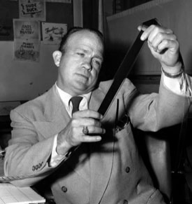 Jack Hannah began his art career designing movie posters for Hollywood theaters. He decided to try getting a job at Disney and soon found himself as an "inbetweener", animating lesser scenes. In time he was a full-fledged animator- but his big break would come when he was assigned to work with Carl Barks, the famed cartoonist whose work with Donald Duck would become legendary.
Jack eventually directed segments for The Wonderful World of Disney and became one of the founding artists at Walt's final dream come true- CalArts in Valencia, California.
Posted by Retlaw Yensid at 7:47 AM