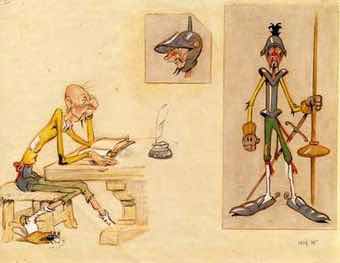 Walt Disney Productions has always employed extremely creative people. Walt Disney used to let his animators and staff use company time to engage in their own creative pursuits. Even if they didn’t produce something that was used in a film, Walt felt that it would keep creativity flowing in his studio. Occasionally, it might lead to an actual project. One such brainstorming session led to possibly bringing Don Quixote to the big screen. The classic book, written by Cervantes, was seen as a perfect followup to Pinocchio.
While extensive character designs were drawn up and a script written, World War II intervened and the project was one of the casualties. It was brought back later in the early 1950’s, though it was envisioned as a smaller budgeted film with reduced animation. Even this project eventually got scrapped due to another project known as DISNEYLAND. Could a Disney version of Don Quixote ever make it to the big screen? The Little Mermaid, which was released in 1989 had originally been proposed in 1939- as a follow-up to Snow White.
Posted by Ralph at 7:15 AM